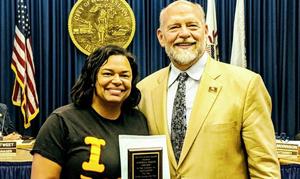 Andrea Parer was named Citizen of the Year in Education!

Each year, people in the community have an opportunity to submit a nomination for Rock Island residents who have made selfless contributions of service to the community.

Rock Island High School’s Andrea Parer is one of those people. Parer was nominated and chosen as the winner for the Education category. On August 26, Parer was honored at the city council meeting.

"Truly humbled. However, the students in the district are some of the most amazing people I have ever met and they are really the ones who should be recognized on a daily basis,” said Parer.

Parer is a Student Support Interventionist at Rock Island High School. She works with students when they may have social, emotional, or academic issues.

Her nomination stated, "Andrea Parer’s caring nature and drive is exactly what education needs. As an educator and coach in the Rock Island - Milan School District she has consistently provided her students with guidance, a sense of community, and pride. Andrea is the leader and founder of the Student Ambassador program at Rock Island High School. This select group of juniors and seniors is constructed to reflect the entire student body, whether it is ELL students, students with disabilities, students from different races, economic backgrounds, and more Andrea ensures everyone is involved. The group volunteers at various community events, especially within the school district. During this past year, Andrea has taken on a new role of being an interventionist. She provides her classroom as a resource and safe haven for students that might need extra help in various capacities as said many times she has an infectious personality that causes people to smile and give students the confidence that they can overcome adversity. Her integrity, thoughtfulness, and determination make her a force as an education leader." Andrea Parer stands with Rock Island Mayor Mike Thoms and the other recipients of the Citizen of the Year Award.