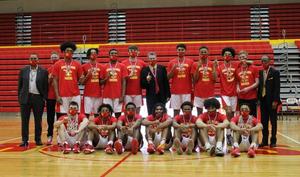 After 20 years of coaching boys basketball at RIHS, Coach Sigel is retiring.
Some will say he's the GOAT (greatest of all time) but one thing is for sure, Rock Island High School Head Boys Basketball Coach Thom Sigel is leaving behind a legacy.
On Tuesday, March 23 Coach Sigel announced he's retiring from coaching after spending 20 years in the Rock Garden.
“After prayer, reflection, and discussion with my family, I am making another very difficult decision and will be retiring from coaching at this time," said Coach Sigel. "While this is very tough, and I don’t know what the future holds, our players and this program deserve my best. If I am not sure I can offer 100% for next year, it is a sign maybe this is the right time to make this decision.”

Coach Sigel has had a successful coaching career at RIHS. He's had 502 wins total in his coaching career, 375 wins just at Rocky. He's had 12 Regional titles, 2 sectional wins, and a State Title in 2011. This year Sigel broke a new record. He now has the second-most Western Big 6 boys' win in league history, breaking a tie with Jerry Leggett. The record is 151. Placing him second behind Duncan Reid.

"Thom Sigel is the kind of coach every school wants on their staff. He is honest, professional, knowledgeable, and the role model you want for your athletes. I hope that we can strike gold for a third time. Duncan Reed gave us twenty-one successful seasons. Coach Sigel added another twenty," said Athletic Director Michelle Lillis. "We'll be looking for someone who can fill those shoes and follow those footsteps. That is a tall order. We wish Thom happiness and success in whatever future endeavors he embarks upon. Congratulations Coach Sigel and thank you from the bottom of our hearts," Lillis added.

Yes, his coaching record is impressive but what's even more impressive is the lasting impact he's had on his players. Many calling Coach Sigel their mentor. You can see the impact by just scrolling on Coach Sigel's Twitter page. Dozens and dozens of tweets wishing the coach well wishes, like this one.

"To the man I’ve known as “Coach” since I was in 3rd grade. You were my mentor on and off the court. You were there for all my accomplishments, and better yet, you never walked away, nor looked down on me because of my mistakes. You are a great coach and will be missed," said basketball player Jordan Rice.

Sigel will miss building those relationships with his players, “God Had blessed me with so many special experiences in coaching, and I will cherish the relationships I have developed with our players and coaches at each school and thank all of them for their efforts," said Coach Sigel.

Congratulations Coach Sigel on your successful coaching career! Enjoy your time off the court!

“The great tradition of Rock Island Basketball will carry on. I wish the program and players all the best, and I am excited to see the continued success," said Sigel. Coach Sigel and the 2021 Basketball Team after their WB6 Championship win. Coach Sigel speaking at the Welcome Back Rally after the team won state back in 2011.