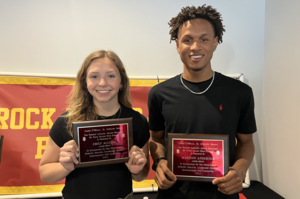 Dual-sport athletes Emily Allison and Marieon Anderson receive the annual James O'Melia Jr. Award
The 2022 James O'Melia Jr. Athletic award was presented to Rock Island High School dual-sport athletes Emily Allison and Marieon Anderson on Wednesday, June 8 at a Rock Island-Milan Booster Club meeting.
The James O'Melia Jr. Award is considered the highest honor that Rock Island High School bestows on student athletes. One male and one female receive the award each year.
Emily Allison, a dual-sport athlete, has accomplished many accolades in volleyball as a 4-year Varsity Letter winner, who was named twice to the Quad City Times All-Metro Volleyball 1st Team, was selected an Illinois-Iowa All-Star, was named Western Big 6 All Conference 1st Team and was selected team captain her junior and senior years. Allison is also a 3-year Varsity Letter winner in basketball and a member of the Lady Rocks Elite Eight Basketball Squad that finished the 2018-19 season 30-2. Allison was also named to the Booster Club Thanksgiving Tourney All-Tournament Team and was selected as team captain her senior year. She is an outstanding scholar earning four IHSA Scholastic Awards, 4 Western Big 6 Academic Awards, and was designated a Charles O. Austin Jr. Scholar her senior year and was a 3-year member of the National Honor Society.
Dual-sport athlete Marieon Anderson is a 3-year Varsity Letter winner in football and set Rocky's school record in receiving touchdowns and was named by Western Big 6 as 1st Team All Conference in football on offense and defense. He was also named by the "PrepZone" to their 6A 2nd Team All State Offense. In basketball, Anderson earned 3 Varsity Letters and received All-State Honorable Mention and Illinois Basketball Coaches Association All-State Special Mention. He was also named Western Big 6 All-Conference 2nd Team. As a student, Anderson served as a member of the Student Council and was a member of the African American Heritage Club. He also served on a community panel on the Rock Island Police Community Relations Commission Board.
The Rock Island-Milan Booster Club supported the James O'Melia Jr. Athletic recognition award with a $1,000 college scholarship to each athlete. Emily Allison plans to continue her volleyball career at Illinois Central College in the fall and Marieon Anderson will play basketball for Lewis University in the fall.
The James O'Melia Jr. Athletic award is given in memory of Rock Island High School graduate James O'Melia Jr. During his time as a student, James O'Melia Jr. was an outstanding multi-sport athlete. He graduated in 1966 and continued to be a dedicated supporter and an enthusiastic fan of Rocky athletics. However, Jim's life was cut short and he died in a drowning accident on May 27, 1981. The first award was presented in 1982, and there have been 73 athletes who have received the James O'Melia Jr. Athletic Award since that time.