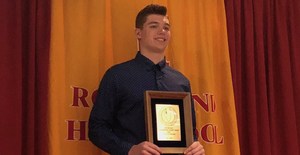 Basketball and football standout known for his competitive spirit
Two Western Big 6 athletes received the Western Big 6 Don Morris Multi-Sport Award at a presentation at Rock Island High School on Monday, May 14. The award is presented each year to a female athlete and a male athlete in the conference who excel in multiple sports during their senior year in high school.
Each high school in the Western Big 6 nominates two athletes, one male and one female. Schools then review the nominations and choose the best athletes that embody the Don Morris Award.
Rock Island High School athlete Ben Ellis received the Don Morris Award for his hard work ethic and competitive spirit in basketball and football. Ellis earned 4 Varsity Letters in both sports during his high school career, and also served as team captain. He has been named as an IHSA Academic All State in football and received Western Big 6 All Conference Academic honors in basketball and football. "There are a lot of great athletes in the Western Big 6 Conference and I am honored to be counted as one of them and honored to be picked for the Don Morris award," said Ellis.
United Township High School athlete Ryleigh O'Brien was received the Don Morris Award for her athletic abilities in four sports: basketball, cross country, soccer and volleyball. She received 12 Varsity Letters in all throughout her high school career. Soccer is O'Brien's sport of choice and she holds 4 Varsity Letters and is the Western Big 6 Scoring Leader for 2018. She was also a Quad City Times Female Athlete of the Year Finalist.  O'Brien is #16 in her graduating class and holds a 4.1 GPA.
The Don-Morris Multi-Sport Award is named after the late Alleman High School Athletic Director and coach. Coach Morris was one of the founding fathers of the Western Big 6 Conference, and the award was created in his memory to honor student-athletes in the WB6 who excel in multiple sports, school and community activities. Morris was a native of Streator, IL and passed away in 1983.