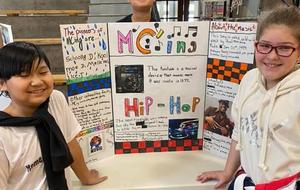 The school hosted a hip-hop fair!
On Friday, Feb. 28, Frances Willard's fifth and sixth--grade students hosted a hip-hop fair at the school.
African Americans have contributed much to the musical history of the United States. Hip Hop is one of our country’s most pervasive musical genres. It is now performed and consumed around the world by many cultures.
There were more than 30 stations on display with opportunities for people to listen to music that represented a genre. Students presented information about elements that pertain to hip-hop or hip-hop artists.
A group of students also perform an evolution of hip-hop dance throughout the fair!