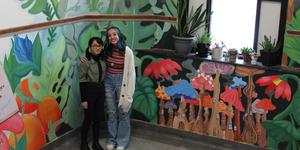 The students created something that will be enjoyed by Denkmann students for years to come!
A bare elementary school stairwell has been transformed into a magical rainforest, thanks to the talents of some Rock Island High School Students!
Denkmann Elementary School teacher Jessica Stockwell met Delaney Carroll a Rocky student last summer at an art festival. After seeing such talent from Delaney and other Rock Island High School students at the festival, Mrs. Stockewell reached out to Delaney and asked if she would be interested in working on a mural at Denkmann.
“It seemed like a great opportunity for students from our community. We have so many talented students right here in Rock Island and their work deserves to be seen,” said Mrs. Stockwell.
Delaney reached out to two other Rock Island High School students, Norah Wright, and Vix Dang and that’s how the mural team was formed.
The students started working on the mural in August 2022, coming in on weekends and evenings between practices and school activities. They finished it at the end of December.
It was the students who came up with the design and to make the mural into an I Spy Challenge for the students.
The Rock Island-Milan Booster Club and Denkmann's PTA  provided funds for materials and a small compensation for the student’s time.
On Friday, January 13, Denkmann Elementary school students got to meet the artists behind the mural. The RIHS students were recognized at Denkmann’s school-wide morning assembly.